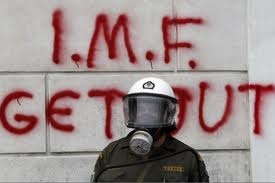 The IMF has been in the news lately not for helping out failing States, but for attacks. The attacks have ranged from the alleged sexual assault of the recent head of the IMF Dominique Strauss-Kahn on a hotel maid to charges of incompetence/softness in bailing out the insolvent countries in the Euro-zone. According to a NY Times piece they have now suffered a major data breach as well. I suppose this is the Annus Horribilis of the IMF in its storied history. In fact, the World Bank has cut off its data link from the IMF after this breach and might have to distance itself in other respects as well. The IMF uses RSA SecurID security tokens and has apparently been offered to replace the old RSA SecurID tokens with new ones according to a Bloomberg piece:

The fund told employees June 8 that it would replace their RSA SecurID tokens. EMC Corp.’s RSA security-systems unit offered to swap the tokens after a breach of its own network, disclosed in March, resulted in the theft of RSA data. A SecurID device is shaped like a key fob or a computer-memory stick and generates random-number passwords used to gain access to a computer network.

The hackers behind the attacks are believed to be affiliated with a foreign government. Is it one of the governments/victims upset at IMF bailout terms? Or is it just good old fashioned intelligence gathering?
Posted by SK at 12:10 PM